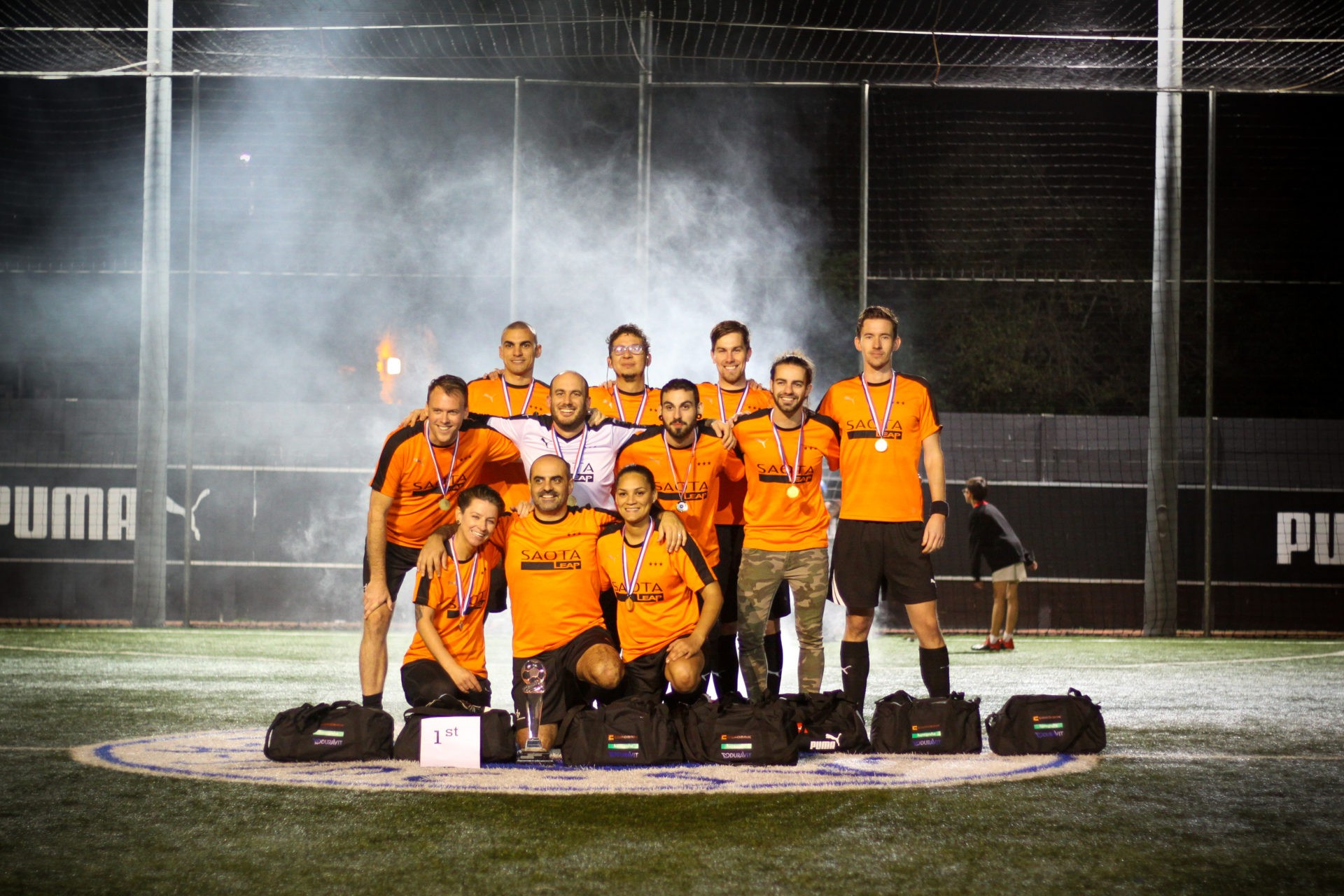 For the third consecutive year SAOTA is crowned the Architectural Futsal League Champions after beating dhk 5-4 in a thrilling end to end encounter. On Friday, 31 May 2019 over 120 spectators gathered to support SAOTA and dhk in the Architectural Futsal League final at Hellenic Sports Club in Mouille Point Cape Town. The tournament celebrates its 8th anniversary in Cape Town as one of the biggest corporate events sponsored by Duravit, Corobrik, Hansgrohe and newcomers Tactile.

A nail-biting contest as two giants face each other in a final for the third consecutive year. So much to fight for on the day with Wade Nelsen tied for top Male goal scorer with dhk’s very own Ryan Lee Adams. SAOTA Captain Mel de Freitas already having the Top female goal scorer in the bag, now aiming for top goal scorer of the tournament! A match sure set to be one of the most electrifying games in the tournament’s history!

SAOTA concede the first goal of the match in the first 5 minutes – the crowd broke out in a raw unaware of what was about to follow – it was as though dhk knew the only way to beat SAOTA, was by putting on a WWF showdown. This tactic saw dhk concede 3 yellow cards on the night and two penalties. This was a catalyst for the SAOTA team to shift gears and welcome dhk to another goal smack down.

Bruised and battered SAOTA stood on strong and fought to the very last minute with a smashing victory goal by SAOTA’s William Meli and some impeccable last-minute saves (reminiscent of a young Manuel Neuer) by SAOTA’s very own all-star goalkeeper Enslin Joubert.

“The comradery in the team, the depths of which we were capable of reaching and the mental composure after all the body slams was something I had never imagined witnessing. Watching everyone channeled in the restless pursuit of our third Championship title – indescribable,” says Mel De Freitas, SAOTA Captain.

Mel de Freitas received the Top Female Goal Scorer award for the 4th consecutive year and was also awarded the overall Top Goal scorer of the tournament beating all the men by a mile.

“However, the biggest highlight was having the most phenomenal support on the sideline. With every goal, sidestep and challenge being followed by the loudest roarrrrrrrrrr from the stands. It played a massive role in our victory,” adds de Freitas.

SAOTA Goal scorers on the night:

A special mention to SAOTA’s Wade Nelsen who voluntarily gave up his race for the Men’s Golden Boot title to play a defensive position in the final and ensure the team got over the finish line as 2019 champions.

Thank you to the SAOTA Directors and to our sponsors Exquisite Bathrooms for their support throughout the season and to everyone who came to watch the game.