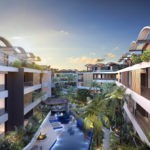 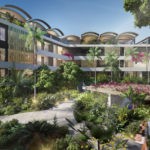 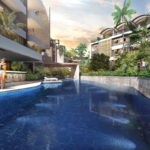 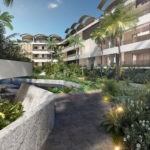 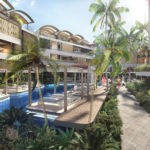 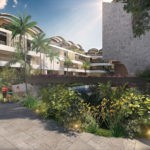 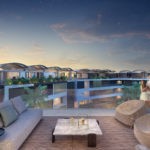 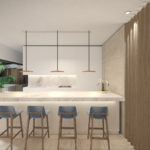 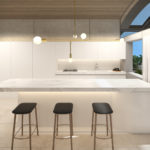 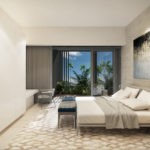 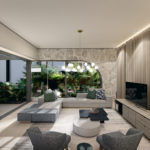 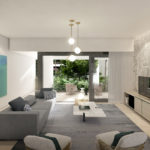 The Casuarina Development comprises of over 90 multi-residential apartments in Mauritius. The site lies adjacent to the existing Casuarina Hotel and is intended to form an extension of the Hotel, with seamless transition between the two.
The architectural language and landscape of the apartments is a contemporary interpretation of the existing fabric. The green spaces become as important as the built form; they are experiential in nature and serve to form privacy gradients with thresholds of trees and planting. The density of the buildings has been addressed by designing a horizontality in each block, to reduce the scale. This also establishes a continuity and a more fluid design, rather than individual blocks repeated on a site. The emphasis of the horizontal bands ties back to the walkway forms present in the existing hotel. The strong sense of horizontality is then offset by the timber clad vaults which float lightly over the buildings, animating the silhouettes and becoming the signature reference of the design.